THE ARTISTIC CREATION IS A REFLECTION OF OUR INNER WORLD

Through their artistic creations, children express the evolutionary moment they are going through. They show us their inner experience in relation to the world around them.

By observing four images with the same motif “the house”, painted by the same child over a period of three years, from 3 to 6 years of age, we can “read” their evolutionary path and the transformation of their state of mind in relation to the surrounding world. 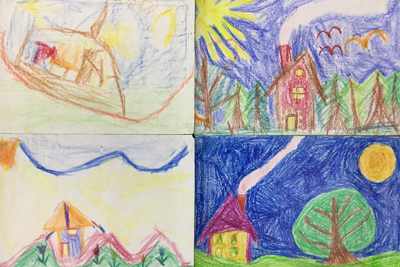 Rudolf Kaesbach has accompanied us as a guest during the month of November 2022, carrying out artistic processes of modelling with clay with the children of Sa Llavor.

The attentive contemplation of the artistic creations that emerge from this process, shows us a global vision of the evolutionary path of the children throughout the different educational stages.

The artistic process must be the central axis of the educational process. Artistic activity benefits in a holistic way the healthy development and growth of the child.

“I am the art teacher, they are the artists”.

“The Princess and the Frog” (6 years old) 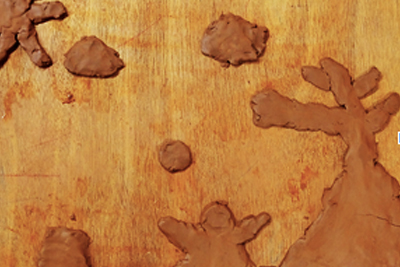 This image comes from the story “The Princess and the Frog” and shows a harmonious and serene composition. The union with the surrounding world is experienced.

It has been made in a flat format, with small pieces of clay that create the scene, centred on the right/left orientation and symmetry.

It begins with the elaboration of the earth, then the mountain and the tree. The expansion of the branches of the tree is repeated in the human figure, although somewhat more restrained.

Of particular importance is the place chosen for the ball in the air, a place of balance that completes the harmony of the image. 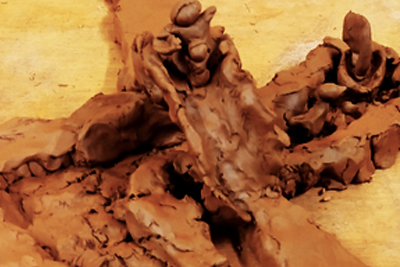 At the age of 7, the world and oneself are still experienced as a non-separate whole and a bridge to separation begins to be built.

For this creation it is proposed to make a river, the land around it and a bridge that connects the two parts.

The rivers can be winding and circular, straight and long, or as in this image, smooth and well contained in the earth.

The bridge appears as a symbol of that passage towards the world that the adult accompanies. 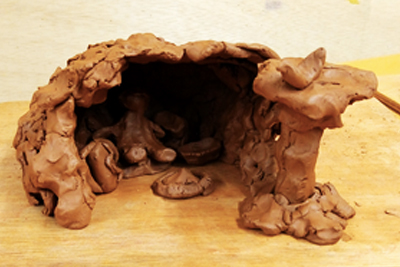 The world and all that inhabits it, one begins to perceive and situate it from oneself, from within, but still with the security of being tucked in and at home.

Some caves have a very wide entrance and appear open to the world, others are deep, dark and solid.

In the image we have a cave where the figure is comfortably seated next to a fire, observing the outside where a tree with a bird appears. 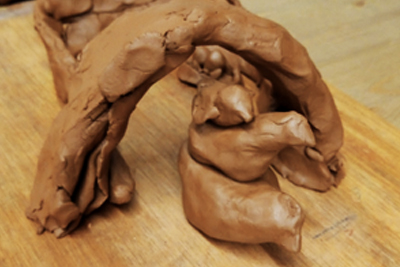 We see the image of a hen carrying her chicks, leaving and crossing a threshold.

At around 9 years of age, the experience of separation from the environment is intensely experienced.

A threshold is crossed that has no way back.

The exit from the children’s paradise leaves behind early childhood and takes us into the reality of the world, but the world is not a scientific, cold and austere place, but a place of kind actions and feelings of beauty. 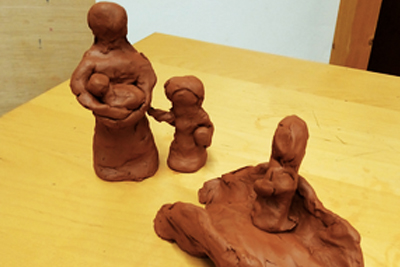 From the guideline of creating a human figure in a scene, multiple options emerge, but all of them, at this stage, reflect the inner search for harmony and balance.

These years are related to the artistic period of classical Greece, and in turn to a more conscious connection with animals and plants that leads to an interest in the laws of nature.

This time between childhood and puberty often shows a blossoming that is visible in their capacity for dedication, care and attention to their own creations. 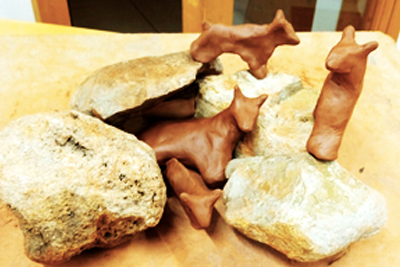 This era is associated on an emotional level with the impetus of the Roman Empire, its structure and ambition. In this creation we are shown the other side of that same era.

We see a serene and peaceful image, of communities meeting secretly in caves where they prayed in silence, hidden from the Romans. 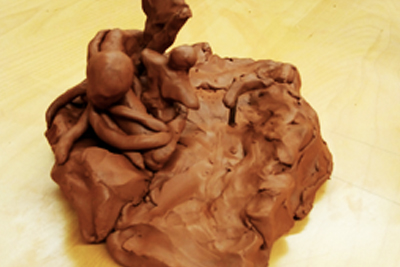 In this case the pattern is to place a ship at sea. The image shows a ship and its crew member facing a difficult situation, attacked by a huge sea creature.

At the onset of puberty, physiological changes and emotional turmoil generate the beginning of an inner turmoil that is reflected in many artistic creations that appear in dramatic form. 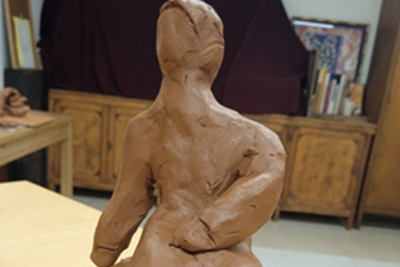 The adolescent seeks orientation in the world through his own ideals in order to be able to develop his judgement independently. The conquest of three dimensions, working with linear perspective and exact proportions offers an objective and at the same time inspiring experience.

The education of the will and free thinking is developed and strengthened through artistic activity.

“When the child engages in an artistic activity, feeling is born within him – and it is this feeling that really nourishes and develops the human being. Through the use of the intellect, one becomes poor in one’s soul, one reaches the inner desert. Through artistic activity one is enriched and grows internally”.

> We explain why and how
Page load link

This website uses cookies to improve your experience while you navigate through the website. Out of these, the cookies that are categorized as necessary are stored on your browser as they are essential for the working of basic functionalities of the website. We also use third-party cookies that help us analyze and understand how you use this website. These cookies will be stored in your browser only with your consent. You also have the option to opt-out of these cookies. But opting out of some of these cookies may affect your browsing experience.
SAVE & ACCEPT
Powered by